This challenge on Codility is an interesting one: given a number of disks of various radii distributed over a line, can you count the total number of intersections in O(N·log(N))? 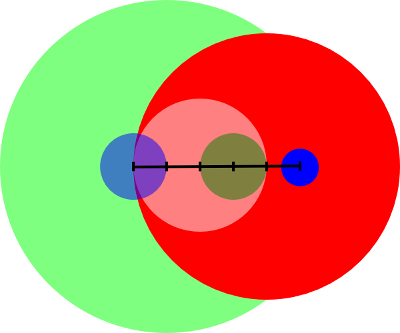 To have a clear idea of how to solve this, I’ve found it effective to visualize this in slightly different terms: if you give every disk a one inch thickness, then the number of intersections in a particular point will be equal to how thick the set of disks is (minus one). To avoid counting the same intersection twice, we only consider the thickness of disks of lower order (given any total ordering).

Here’s the example from above, in “thickness’’ terms. The higher the disk, the higher its order.

Ah, now it’s much easier to count the intersections. Also, it is easy to code.

Here’s the solution, which passes all tests for correctness and complexity: